Reports are out claiming that Arsenal fan Piers Morgan has hit out at the club for failing to bring in any new players in the summer. 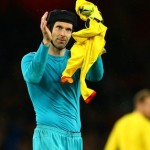 The Gunners added goalkeeper Petr Cech during the transfer market despite having funds available to bring in quality signings.

Arsenal supporters were desperate for Arsene Wenger to sign a quality striker to aid their title pursuit but after that did not occur, Morgan blasted the Frenchman and the club for opting against any expenditure.

“This was the season when all the excuses where supposed to be over,” the TV personality and journalist said on talkSPORT‘s Alan Brazil Sports Breakfast show.

“According to board member Lord Harris only last month, we have £200million sitting there and we can afford ‘any player in the world Wenger wants, other than possibly Messi and Ronaldo’.

“Yesterday the deadline elapsed and I spent more money buying a cup of coffee in Starbucks for £2.50 than Arsene Wenger spent in the window after initially buying Cech earlier in the summer.

“Wenger has spent £10m out of £200m at his disposal. Arsenal fans know what we need, we know we haven’t had a first class centre-forward since Van Persie betrayed us and went to Man United.

“I cannot understand why Wenger would do this. Why, when we are on the cusp of potentially challenging again, when you have £200m at your disposal, do you literally do nothing?

“I think it’s a shameful abrogation of your duties as Arsenal manager, I think it is further indicative – to me – than he is not the Arsene Wenger he was ten years ago, and I’m afraid that because of his inaction in this transfer window, arsenal are likely to come third or fourth again or potentially slip out of the top four.

“The idea that we’re on anywhere the same level as Manchester City is laughable. I think we’ll be about 15 points adrift of City, minimum, this season and for me that’s inexcusable.

“I think Arsene Wenger was one of the greatest managers the world has ever seen for eight years, but for the next ten years he’s been unbelievably disappointing my eyes.

“This behaviour yesterday in the transfer window absolutely personifies the stubbornness, the arrogance, the intransigence and the ‘I know best’ mentality Wenger has.”