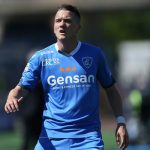 According to talkSPORT sources in Italy, Liverpool have received a boost in their pursuit of Udinese midfielder Piotr Zielinski.

The Merseysiders are currently involved in a pursuit with Napoli and AC Milan for the 22-year-old, with some reports claiming that Napoli have already agreed a fee with Udinese for the player.

However, the latest report claims that the Poland international prefers a move to the Reds and his agent has indicated the same to Napoli officials.

AC Milan are said to be the player’s second choice ahead of Napoli at the moment.