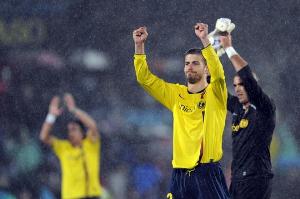 European and Spanish champions FC Barcelona has been reported to be moving to head-off interest from Real Madrid for defender Gerard Pique.

Local Spanish newspapers have reported that Barcelona wants to open new contract talks with the former Manchester United centre-half with the view to increasing his buyout clause to £40 million.

It is believed that Barcelona are making the move over fears that Real president Florentino Perez will attempt to sign Pique at the end of this season.