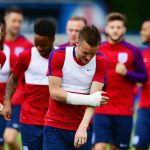 Reports are out claiming that Arsenal hero Robert Pires is backing their move for Leicester City striker Jamie Vardy.

The Frenchman thinks the England international would embrace the step up and continue where he left off for the Foxes.

Pires told the Daily Mail: “There is no reason why it couldn’t work out for Vardy.

“He scored a lot of goals in the Premier League last season and is now known around the world.

“He has the ability, comes across as very hard-working which Arsenal like, and he’s a great finisher.

“There’s a lot more pressure with playing for a big club, so it will be a step up.”