Reports are out claiming that Robert Pires has his fingers crossed that Arsenal can produce a change in fortune at Old Trafford. 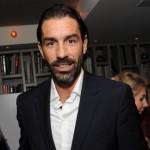 ?The Gunners take on Manchester United in the FA Cup quarter-final on Monday night and former French ace Pires hopes they can turn the tables on what has been a poor recent run at the famous venue.

?”Playing in this stadium is very difficult for Arsenal. But I hope we can change history there. This is a great opportunity to do it,” he told The Express.