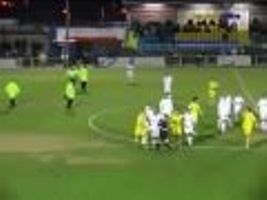 Ever heard of the saying, bad things happen to good people?

Well this is exactly what happened in the match between Havant & Waterlooville and Dorchester.

Our good guy is one of the player involved in the match. A crazy streaker, wearing only a wig decided to steal the show by running on to the pitch while the game was going on.

He then starts running around in between players and match officials in an attempt to avoid capture by the security personnel.

Our good guy decides to take matters in his own hand and chased down the streaker before executing a perfect NFL style tackle to bring down the crazy nudist.

And what does our good guy get for all his efforts?You guessed it, a RED card. His team-mates could not believe what has just happened and tried to talk the referee out of it but it was too late.

Maybe the streaker was a pal of the referee.