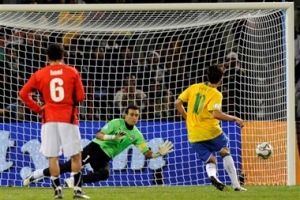 Football’s law-making body has banned the use of “feints” by penalty-takers ahead of the World Cup finals in South Africa.

The International Football Association Board (IFAB) has changed the written laws surrounding the taking of a spot-kick to prevent players dummying or pausing at the end of their run up, a tactic often employed to see which way a goalkeeper dives before slotting the ball in the other side of the goal.

Players will still be allowed to pause and jink to their heart’s content during their run-up, but once they reach the ball, any feints will be punished with a yellow card and the penalty must be retaken.

FIFA’s general secretary Jerome Valcke said : “Feinting in the run up to take a penalty kick to confuse opponents is permitted,”

“However, feinting to kick the ball once the player has completed his run-up is now considered an infringement.”