Reports are out claiming that Calum Chambers has revealed the reasons behind his ever-increasing maturity at such a young age. 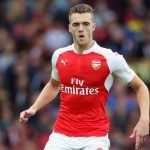 The 20-year-old defender revealed that playing alongside experienced teammates at first club Southampton and now at Arsenal has helped him develop into a well-rounded person and player.

Chambers picked out two Gunners colleagues in particular who have influenced him since his arrival, targeting fellow defenders Per Mertesacker and Laurent Koscielny as those that have assisted him the most.

“All my friends think I’m mature and I guess I have had to grow up a lot,” he told the club’s official website.

“At Southampton you get chucked into the first team at an early age and you are around people that are in their mid twenties and thirties so you have to adapt to that. I feel I have matured a lot quicker than others my age.

“Some people meet me and think I’m a lot older. I dont know if it is the way I look or the way I act but there is something that makes people think I’m older. I think the most important thing is for me is to learn.

“I’m not getting as much game time but concentrating on training, playing with the players that are here is only going to help me improve. Learning from the players like Per and Koscielny, I feel I can talk to them during sessions.

“If I want to get a bit of advice or learn something about the position, I feel it is easy to go up to them and talk to them. I can watch them in games and study the way they play and that is only going to benefit me so even though I’m not playing as many games, I’m taking advantage of it and learning.”