Arsenal’s Mesut Ozil has admitted that it is a pleasure to be a teammate of Mathieu Flamini. 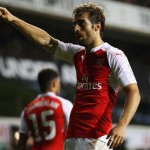 The French defensive midfielder has made only one Premier League appearance for the Gunners this season but is still a key part of the squad according to his close friend Ozil.

“I have a really good understanding with Mathieu,” the German told Arsenal Player.

“He’s a guy who always gives 100 per cent on the pitch but when he’s off the pitch, he’s a player who makes a lot of jokes and gets on well with a lot of his team-mates.

“He’s just a great guy with whom I have a lot of fun.

“As I said, we’re just pleased to have him in this team.” Arsenal To Make Carl Jenkinson Available For Loan Next Season

Theo Walcott Desperate For Arsenal To Finish Above Tottenham