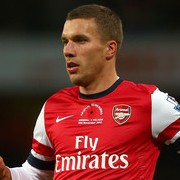 Lukas Podolski is open-minded about a summer move even though he is happy at the Emirates.

Podolski took time to settle this season after joining the Gunners from Cologne last summer for £11m.

The Germany international’s future has been the subject of growing speculation, and we reported recently that he is on Turkish giants Galatasaray’s radar along with Gervinho.

Though Wenger has launched a staunch defence of Podolski, he has failed to rule out that anything can happen in football.

“There are always offers, I don’t have any influence on that,” Podolski told German paper Bild.

“Of course I feel honoured.

“But, the fact is, I have a contract with Arsenal. There’s no reason to leave the club. However, in the football-business a lot of things are conceivable.”