It has been revealed that police are hunting down three Tottenham ‘fans’ who pelted Arsenal winger Theo Walcott with coins during last month’s derby. 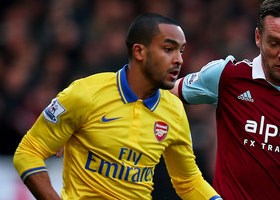 The England international winger came under a shower of missiles from Tottenham fans as he was carried off on a stretcher in the north London derby at the Emirates on January 4.

Stewards and St John Ambulance staff were also hit by the coins after Walcott made a 2-0 gesture with his hands.

A statement said: “During the match, an Arsenal player on a stretcher, medical staff carrying him and stewards were struck by coins and other missiles thrown at them from a section of the crowd occupied by Tottenham fans.

“The player and stewards received minor injuries as a result. Officers from the Metropolitan Police launched an investigation and have now identified three men they would like to contact.”