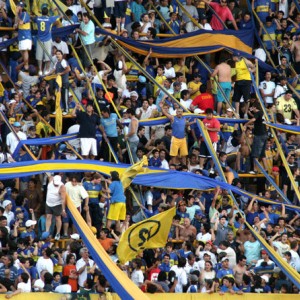 Eight Boca Juniors fans were hit by rubber bullets after police fired at them as they fought to leave the packed visitors’ terraces at the end of their team’s match at Independiente on Sunday.

According to local reports, police started firing rubber bullets and throwing tear gas canisters to force the fans to leave the Libertadores de America stadium in the Buenos Aires suburb of Avellaneda after the 0-0 draw in the Apertura championship match.

Boca vice-president Juan Carlos Crespi blamed the police for the incidents, telling reporters “I went to pick up the wounded, this is the police’s fault.

“The fans were calmly leaving (the terraces) when from behind (police) started firing, sparking chaos. It can’t be that there was only one exit opened for almost 4,000 people.”

He added: “Boca will make a complaint because police themselves admitted to me they had made a mistake.”

Fabregas : We Could Have Beaten 15-Men Manchester City!