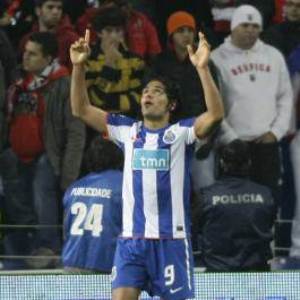 Porto produced a sumptuous display to thrash second-placed Benfica 5-0 at home in Sunday’s “classico” and extend their lead in the Portuguese Premier League to 10 points.

Winger Silvestre Varela opened the scoring in the 12th minute with a first-time shot from near the penalty spot after a fine run by burly Brazilian forward Hulk.

Champions Benfica failed to threaten a comeback after the break and suffered another blow when their captain Luisao was sent off in the 65th minute for elbowing Fredy Guarin.

Hulk converted a penalty on 79 minutes after being fouled by Fabio Coentrao and completed the rout with a long-distance drive one minute before the final whistle.

Porto are on 28 points from 10 games with Benfica on 18. Madeira club Nacional climbed to third place with a 1-0 win at Pacos Ferreira.