Reports are out claiming that Porto will insist on top price to sell Yacine Brahimi. 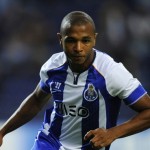 For the moment, Porto have referred the likes of City to the midfielder’s €50 million buyout clause.