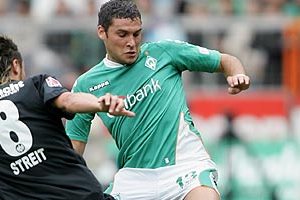 Premier League strugglers Portsmouth are set to announce the signing of Dusko Tosic.

It has been reported that Pompey are set to land Tosic on a free transfer after he was released by Werder Bremen earlier this month.

The Serbian international defender will join Pompey in their desperate bid to avoid relegation at the end of a nightmare season.

Tosic, now age 25, was awarded a work permit on Thursday and could go straight into the side to face arch rivals Southampton on Saturday.