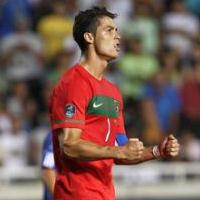 A virtuoso performance from one Real Madrid player helped Portugal overcome the loss of another as they eventually saw off 10-man Cyprus to stay at the top of Euro 2012 qualifying Group H.

The build-up to the game at the NEO GSP Stadium was overshadowed by the sudden international retirement of Ricardo Carvalho, but his club team-mate Cristiano Ronaldo was on hand to deliver three points anyway.

Watch LIVE Shearer and Koeman – Your Chance To Ask Them Questions