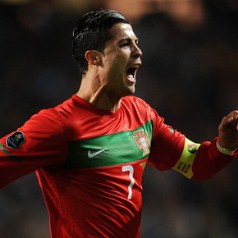 A Cristiano Ronaldo-inspired Portugal stormed into the Euro 2012 finals with a thumping win over 10-man Bosnia-Herzegovina in Lisbon tonight.

Ronaldo struck twice, including a wonderful 35-yard free-kick after just eight minutes, to set the tone for a goal fest.

After the first leg finished goalless, Ronaldo’s opener and an equally impressive strike from Nani ensured they assumed control inside half an hour.

Bosnia kept in touch when Zvjezdan Misimovic netted a penalty just before half-time, but Ronaldo struck his second soon after the resumption.

Bosnia then had Senad Lulic sent off but they battled on bravely and when skipper Emir Spahic scored on 66 minutes at 3-2 they retained belief.

That was quickly eroded, however, as Portugal doubled their tally with Helder Postiga netting twice either side of a Miguel Veloso free-kick.