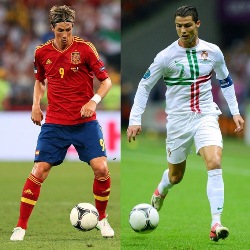 Spain have met Portugal 34 times – more than any other side – winning 16 times and losing just six.

However, this will only be the third time that Spain and Portugal will have met outside of the Iberian Peninsula.

Their last encounter, in November 2010 in Lisbon, ended 4-0 in favour of Portugal, which remains Spain’s heaviest defeat since 1963.

Spain have won just two of their last 12 games against Portugal.

Fourteen of Spain’s 16 wins against Portugal occurred before 1960.

Portugal and Spain have met three times in a major tournament, winning once each and drawing the other game.

Those three games have produced just four goals in total.

Portugal are making their fourth semi-final appearance at European Championship finals (1984, 2000, 2004), while they have only managed to reach the final once, on home soil in 2004.

Spain have won 31 out of 34 competitive games under Vicente Del Bosque.

Spain have kept a clean sheet in each of their last eight knockout games in major finals.

The Spaniards have been ahead in 18 games at the Euros so far and have never lost – W16 D2.

Spain have conceded just one goal so far at Euro 2012, fewer than any other side.

Five of Spain’s eight goals at Euro 2012 have come in the last 30 minutes of play.

Portugal have hit the woodwork six times at Euro 2012, more than any other side at any European Championship finals (1980-2012).

Four of Portugal’s six shots which have hit the woodwork have come courtesy of Cristiano Ronaldo.

Cristiano Ronaldo is the first ever player to attempt 30 shots (including blocked) in a single Euro tournament.