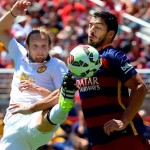 Manchester United took the lead in the first half through an Ashley Young corner. His cross was met by a stooping, unmarked Rooney, whose header left Marc-Andre Ter Stegen static.

Barcelona had chances, and Luis Suarez twice hit the post. His first effort came when the scores were level, a free kick that left David de Gea stranded, just like his second attempt, another from outside the box that hit the opposite post.

In the second half, Memphis Depay went close with a solo run into the box, bringing a save from Jordi Masip, and Ivan Rakitic sent a free kick just over the bar. United made it two when Lingard tapped in at the back post following an entire change in Louis van Gaal’s line up.

Munir then hit the woodwork, the third time for Barcelona, and two excellent goals, one for Rafinha and then for Januzaj, gave a frantic finish to an enjoyable game.