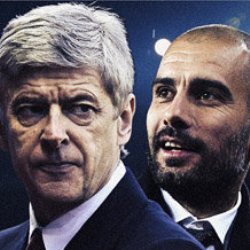 Premier League side Arsenal is set to take on Spanish champions FC Barcelona tonight in their Champions League last-16 clash at the Emirates Stadium.

Arsenal and Barcelona have been drawn together three times in Europe, the 1999-2000 Group Stage, the 2006 final and last season’s quarter final, with Arsenal winning none and losing three of the five games.

It is also worth mentioning that there have been red cards in three of the five matches between Barcelona and Arsenal. So will tonight’s match be a fiery one? We won’t bet against it.

Arsenal have scored a joint-competition-high 18 goals in the Champions League this season while Barcelona have the tightest defence in the group stage, allowing their opponents just eight shots on target against them.

Arsene Wenger is set to hand rookie goalkeeper Wojciech Szczesny a start against the world best attack and Arsenal midfielder Denilson has declared that his side is more than match for the might of Barcelona.

Barcelona boss, Pep Guardiola has said that he will go into the match with full respect for Arsenal and that he is keen to see French midfielder Samir Nasri face his Barcelona side.

Barcelona midfield superstar Andres Iniesta has declared that Barcelona will have to beat “one of the best teams in the world” if they are to pip Arsenal to a place in the Champions League quarter-finals.

The Dutch international striker is back from a long term injury and is firing on all cylinders for the Gunners in the Premier League at the moment. Van Persie has scored ten goals in nine games since the turn of the year and Arsene Wenger will be keeping his fingers crossed for the Dutchmen to deliver again.

The ‘Best Player In The World’ Lionel Messi is definitely the player to watch for Barcelona tonight. The Argentine international superstar has scored an amazing 40 goals in 34 appearances for Barcelona in all competitions this season. We will not bet against him from scoring again tonight while given the Arsenal defence a run for their money.

Who do you think will win this match and with what scoreline? We at TFM predict an upset with the Gunners winning 1-0 at home. You can leave your predictions in the comment section below.

You can also vote as to who you think will win this exciting clash and at the same time see what other football fans from around the globe think. Vote Now!

Remember, you can watch the game LIVE only at TotalFootballMadness.com Cheers!