Fraser Forster produced a man-of-the-match performance in the Southampton goal as Ronald Koeman’s side held title-chasing Arsenal at the Emirates Stadium. 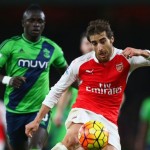 The former Celtic goalkeeper has yet to be beaten in 360 minutes of Premier League action since returning to the Saints’ starting eleven against Watford on January 13 following almost ten months out with a serious knee injury.

Forster made ten saves against Arsene Wenger’s side, the best being a point-blank block from Mesut Ozil in the 20th minute, and exuded a calm authority as the Gunners dominated possession in the final 15 minutes of the match.

The draw sees Arsenal slip to fourth place, five points behind leaders Leicester City with 14 matches of the Premier League season remaining, and on Groundhog Day it looks like another New Year slump could derail their title aspirations once again.

Wenger’s side have collected just three points from their last 12, and have failed to net in their last three Premier League matches.