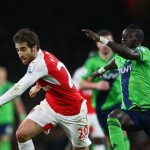 Arsenal are without a win in their last four Premier League matches, and if they fail to score against Bournemouth at Dean Court on Sunday they will equal their worst non-scoring run for seven years, when they played out four successive goalless draws in January-February 2009.

Forster’s 10 stops against the Gunners is the highest save total in a Premier League match.