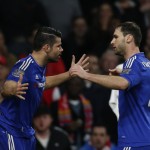 Diego Costa dented Arsenal’s title challenge by scoring the only goal of the game as Chelsea took three points from The Emirates Stadium.

The Spanish striker scored in the 23rd minute after Per Mertesacker had been sent off five minutes earlier for bringing him down when he would have been through on goal.