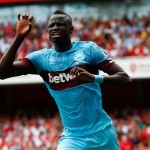 Arsenal got off to a bright start in the first half, and started to increasingly dominate proceedings, with chances for Olivier Giroud, Santi Cazorla and Aaron Ramsey, but West Ham were never out of the running.

They scored first when Dimitri Payet’s curling free kick was headed home by Kouyate, after Cech missed the flight of the ball. It was West Ham’s new star signing who intervened to positive effect, not Arsenal’s.

In the second half, West Ham again made the most of their chances, and Cech made another mistake, when Zarate seized on a loose ball to take an early shot that squeezed past a stunned goalkeeper.

Arsena threw on their attacking substitutes, including an unready Alexis Sanchez, but West Ham held on with no moments of panic.