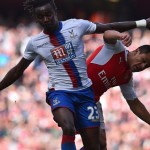 Arsenal let another lead slip as a Petr Cech error gifted Crystal Palace a 1-1 Premier League draw at the Emirates.

Alexis Sanchez planted a header past Wayne Hennessey at the end of an otherwise featureless first half to give Arsenal the lead.

But Yannick Bolasie earned a share of the spoils on 82 thanks to some poor Arsenal defending – first Francis Coquelin failed to close the Palace winger down, then Cech failed to keep out his low shot at the near post.

The result came after Arsenal surrendered a two-goal lead in last weekend’s 3-3 draw at West Ham.

They failed to reclaim third place from Manchester City, who won at Chelsea on Saturday, and now sit just four points ahead of fifth-placed Manchester United. Arsene Wenger Insists Arsenal Were Never In For Raheem Sterling