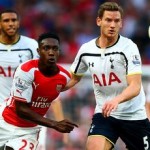 Tottenham have won just one of their last 22 Barclays Premier League games away at Arsenal.

Arsenal last failed to score at home to Spurs in the Premier League in November 1998. Since then the Gunners have scored 39 times in 16 games.

Arsenal are undefeated in the Premier League.

Seven of Tottenham’s eight league points this season have come in London derbies. Gareth Bale Hoping For A Miracle Against Real Madrid