Arsenal’s Premier League title hopes were dealt a severe blow courtesy of a 2-1 defeat at the hands of Swansea City. 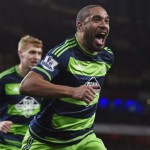 Swansea started the match three points above the relegation zone, and had to do without manager Francisco Guidolin, who was missing with a chest infection. They also made six changes to the side as they looked to save resources for their weekend game at Norwich.

For Arsenal, it was a chance to cut the gap between themselves and Spurs and Leicester City, above them.

All seemed to be going well when Joel Campbell hooked in a volley after a neatly-timed run, but Jordi Amat’s tackle on Mesut Ozil resulted in a Wayne Routledge equaliser as Arsenal appealed for a foul. In the second half, Alexis Sanchez hit the bar with a free kick – Arsenal hit the woodwork four times in the match. before Ashley Williams then bundled in the winner.

Before then, Arsenal fans had jeered off their side at half time, and booed their manager for his decision to take off Joel Campbell; at full time, the boos got even louder.