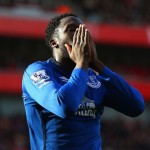 17’ – CHANCE: Ospina to the rescue as Lukaku bursts clear after stealing a long ball from Gabriel’s toes. The Colombian goalkeeper comes out sharply and parries it away from the Belgian before chasing down the loose ball and knocking it out for a throw.

39’ – GOAL! Arsenal 1-0 Everton. Arsene Wenger backed Olivier Giroud after Wednesday’s horror-show and he has been rewarded. The Frenchman is given the freedom of the penalty area by John Stones from Mesut Ozil’s corner and he sends the ball into the far corner with a smart right-footed volley.

65’ – CHANCE: Everton break at speed and Ross Barkley drives a cross to the near-post for Lukaku, whose fierce shot is excellently tipped over by Ospina.

67’ – OUCH: Coquelin’s hard-man image is increasing by the minute as he gets a Giroud header right in the mouth when they both go for a looping ball in midfield. There is plenty of blood but the midfielder is now sitting up.

87’ – GOAL! Arsenal 2-0 Everton: Substitute Tomas Rosicky seals the win, controlling a Mesut Ozil pass and then drilling a shot, which deflects off Phil Jagielka, into the net from just outside the area.