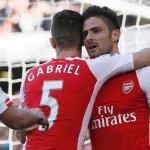 Arsenal moved back into third place in the Premier League courtesy of a 2-0 home win over Everton.

Olivier Giroud opened the scoring in the first half to erase the memory of his awful performance against Monaco at Emirates Stadium in midweek.

And a late goal from Tomas Rosicky ensured Arsenal took all three points to move ahead of Manchester United and to within four points of Manchester City. Arsenal To Release Striker On Loan In The January Transfer Window