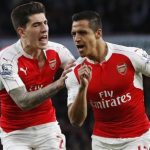 29′ – OFF THE BAR! Gareth McAuley rises at the near post but sees his header from a right-wing corner ping back off the woodwork.

38′ – GOAL! ARSENAL 2-0 WEST BROM. Sanchez grabs his second of the night with a whipped free kick that arcs through a breaking wall and into the bottom corner. Too easy.

33′ – ARSENAL CHANCE! More great work from Bellerin on the right. The full back cuts it back to Ozil on the edge of the box who sees Craig Dawson hack it off the line after the ball had somehow squirmed under Foster.

72′ – WEST BROM CHANCE! Gardner’s left wing corner is missed by Cech and he is grateful that Rondon can’t convert on the stretch at the back post. The goal was gaping.