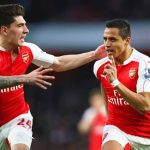 Arsenal have found the net in all 20 of their Premier League meetings with West Brom – the best 100% record in the division.

Tony Pulis has never won a PL game at Arsenal, losing on all eight occasions.

The Gunners have now won a landmark 500 Premier League matches – only Manchester United with 583 have won more.

West Brom have won just one of their last 12 Premier League away games (D5, L6).