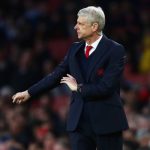 A familiar fight? For all of the talk about another title meltdown, Arsenal are locked in a battle for Champions League qualification that has become par for the course in recent seasons. Wenger knows he needs to snare third spot to be sure. If Manchester City spring a shock and go on to win the Champions League while dropping out of the top four, then the Citizens will qualify as holders and the fourth-placed PL side will drop into the Europa League.

Arsenal face three sides currently in the bottom four in their last four matches but could face a nervy finale if there are any more slips, particularly as they travel to the Citizens in their penultimate game. Fans again protested their disillusionment with another season where the team failed to live up to their high expectations ahead of kick off. It’s already a precarious time for Wenger and failure to make the CL would surely be the last straw for many.