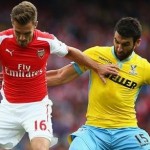 Palace have won just one of their six opening weekend fixtures in the Premier League.

This was the first match in seven Premier League home games that Olivier Giroud has failed to score.

Arsene Wenger’s side have won their last six Premier League games in a row.