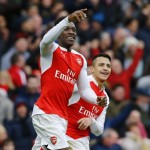 Danny Welbeck’s last-gasp winner saw Arsenal come from behind to defeat 10-man Leicester City 2-1 at Emirates Stadium, moving them to within two points of the leaders in the Premier League title race.

Jamie Vardy won and converted a penalty on the stroke of half-time, but Danny Simpson was sent off for a second booking early in the second half in an incident that changed the game.

The Gunners capitalised when substitute Theo Walcott equalised with 20 minutes remaining and sealed a dramatic victory through the returning Welbeck – off the bench to make his first appearance since April – as he headed home in the fifth minute of stoppage time.

Leicester’s defeat is only their third of the league campaign, while Arsenal’s second straight victory puts them within striking distance of the top of the table ahead of the meeting between title rivals Manchester City and Tottenham.