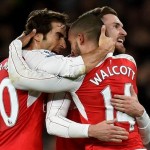 The Gunners have scored in their last 11 league games, and have now scored 100+ goals in all competitions in 2015.

Mesut Ozil has 15 Premier League assists this season, only five players have ever managed more in a single PL campaign.

Ozil now has 29 Premier League assists in his career, as many as Eden Hazard but in 59 games fewer.

Man City have kept only two clean sheets in their last 12 PL games, after not conceding in their opening five matches of 15-16.

Only Harry Kane (25) has scored more Premier League goals in 2015 than Olivier Giroud (Vardy/Aguero also on 19).

Arsenal haven’t lost at home in the Premier League since the opening day of the season.

Arsenal have lost just one of their 19 Premier League home games against Manchester City (W12, D6).