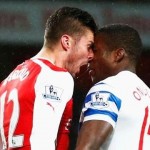 8′ – PENALTY! A goalmouth scramble ends with the ball drifting out of the QPR box. Sanchez gets to it first, and Traore cleans him out with a ludicrous, unnecessary challenge.

28′ – GREEN SAVE – Giroud curls a shot over the wall, but Green has time to get across to palm it away.

37′ – GOAL! Arsenal 1-0 QPR. Sanchez scores – Welbeck toes a ball left for Cazorla, who finds Gibbs on the left of the box, who crosses for Sanchez, and he dives to head into an almost empty net.

52′ – GIROUD SENT OFF – Giroud is off. He headbutts Onuoha after the defender pushed him into Rob Green. A ludicrous moment from the French chap with the loaf of bread for a haircut.

65′ – GOAL! Arsenal 2-0 QPR. Rosicky scores – Sanchez drives from midfield, into the box, with four QPR players just gawping at him. He finds Rosicky on the right, and he drills a low shot past Green.

78′ – PENALTY! Hoilett is tripped by Debuchy as he dances around him, and there’s some true Arsenal comedy.

79′ – GOAL! Arsenal 2-1 QPR. Austin scores – Austin smashes the penalty down the middle, and Szczesny dives out of the way. Olivier Giroud Ready To Play Every Game For Arsenal