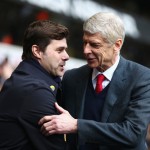 Who will be happier with the point? Arsenal.

They would have taken a share of the spoils going into this game given their poor form, and they showed the spirit that was missing in the defeat at Manchester United.

Spurs, too, showed character to turn the game around but, having gone ahead, should have stayed there against ten men. Gennaro Gattuso : I’ve Been Told Not To Go To White Hart Lane