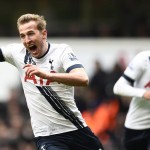 This was billed as the most important ever clash between North London’s title chasers, and the sizzling atmosphere at White Hart Lane matched the absorbing contest on the pitch.

After Spurs dominated the scrappy and chaotic opening exchanges, Arsenal drew first blood with a high quality strike from Aaron Ramsey, who flicked in Hector Bellerin’s first-time cross after good work by the lively Danny Welbeck.

The game’s turning point came early in the second half when Francis Coquelin’s ill-advised lunge on Harry Kane saw him earn a second yellow card, and immediately the momentum swung Tottenham’s way.

Toby Aldweireld lashed in an equaliser after Erik Lamela flicked on a corner and Kane raised the roof with a spectacular goal, cutting in from the left and sending an arcing shot into the far top corner.

Spurs were buoyant at this stage and looked like going on to win the game, but Arsenal demonstrated the grit to fight back that has been missing in recent weeks.

Moments after Arsene Wenger brought on Olivier Giroud, the Frenchman spotted the run of Sanchez, whose pinpoint shot found the bottom corner as the Chilean celebrated in front of the travelling fans.

Aaron Ramsey could have won all three points late on when he went clean through, but Kevin Wimmer made a brilliant late challenge on the Welshman, ensuring the points were shared.