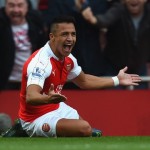 6’- GOAL! Arsenal 1-0 Manchester United. What a start for the Gunners. A superb finish from Alexis Sanchez at the near post sends the home fans into raptures. United all over the place!

7’ – GOAL! Arsenal 2-0 Manchester United. What is going on? Theo Walcott cuts the ball back for Mesut Ozil to steer home and double the Gunners’ lead in under seven minutes! United all at sea.

19’ – GOAL! Arsenal 3-0 Manchester United. Wow! Three inside 20 minutes. All Sanchez’s doing. He skips through the challenge of Darmian onto his right foot, and fires the ball into the top corner. He’s on a hat-trick already!

34’ – CHANCE! Should have been four! Wonderful clipped cross from Sanchez picks out Aaron Ramsey, who is unmarked, but he side-foots his volley over from close range.

45’ – SAVE! He has had almost nothing to do, but Cech reacts brilliantly to smother Martial’s effort at goal. Great turn by the Frenchman, but Cech was alert to save with his legs.

62’ – SAVE! In search of his first Premier League away goal since this fixture last season, Rooney has an effort at goal, but Cech gets two hands to it and beats the ball to safety.

68’ – SAVE! Cech again to the rescue. Schweinsteiger’s touch lets him down when played in, but the Arsenal stopper was out quickly to save at the feet of the German midfielder.

73’ – CHANCE! Good work from Monreal picks out Ozil in space on the edge of the box, but his powerful strike is straight at De Gea.

85’ – CHANCE! Should have been four! Giroud holds back, is picked out ten yards out, with the goal gaping, but he tamely fires straight at De Gea.

90+2’ – WOODWORK! Oxlade-Chamberlain hits the crossbar after being put through. Was a delightful chip, but just got a little bit too much on it.