Arsenal are now four points clear of Everton in the final Champions League spot after a 3-0 victory over Newcastle at the Emirates Stadium. 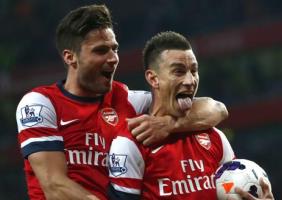 Newcastle, who had manager Alan Pardew back on the touchline after his seven-game ban for headbutting Hull City’s David Meyler, were outplayed by a patient Arsenal side for whom Santi Cazorla, Aaron Ramsey and Mesut Ozil shone.

The opening goal came after 26 minutes when Laurent Koscielny barged Moussa Sissoko out of the way to prod home Cazorla’s chipped free-kick past Tim Krul.

Arsenal doubled their lead through Ozil’s tap-in at the far post on 42 minutes after Krul had twice denied Olivier Giroud with blocks from point-blank range.

Giroud then completed the scoring midway through the second half with a bullet header at the near post from Ozil’s driven cross.

The Gunners next face West Brom at the Emirates on Sunday knowing a win, or a defeat for fifth-placed Everton at home to Manchester City on Saturday, will ensure their qualification for the Champions League for a 17th successive time.

For Newcastle, it is a sixth consecutive defeat, their worst run for 27 years, and the supporters held up banners at the end calling for their manager Pardew to be sacked.