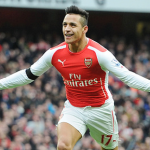 Alexis Sanchez continued his outstanding debut season in England by helping himself to a double and a trademark assist in Arsenal’s stylish 3-0 win over a bedraggled Stoke at the Emirates Stadium.

The Chilean forward increased his haul to 12 Premier League goals and seven assists in what is rapidly turning into an epic personal campaign since his move from Barcelona during the close season.

He showed off all of his considerable £35 million wares as he bounded onto a pass from Tomas Rosicky to squeeze the ball beyond Asmir Begovic on 33 minutes for his side’s second goal before adding the third from a free-kick shortly after half-time.

He was also involved in the opening goal when he threw over a cross for Laurent Koscielny’s free header on six minutes with Stoke looking a poor imitation of the team who turned Arsenal over 3-2 at the Britannia Stadium last month.

Arsenal lost Mathieu Debuchy with a shoulder injury on 11 minutes, but they were the length of the Holloway Road ahead of Stoke, who were dependent upon their goalkeeper Asmir Begovic to prevent them from being humilitated.

A first Premier League win of 2015 for Arsene Wenger’s side was highly impressive. Mark Hughes and Stoke will be relieved to escape from London having shipped only three.