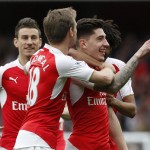 4’ – GOAL! Arsenal 1-0 Watford. Ozil scores – Iwobi dinks in a pass to Sanchez in the box. He heads in towards goal, but Gomes dives to his right to save. Sanchez forces the rebound past the ‘keeper to put Arsenal ahead.

15’ – GOMES SAVE – Iwobi cuts on to his right foot on the left side of the box, and Gomes has to tip a curling shot away from the top corner.

38’ – GOAL! Arsenal 2-0 Watford. Iwobi scores – Coquelin picks out Sanchez with a well-timed pass down the right, he takes a couple of touches inside the box and slides the ball across for Iwobi to clip past Gomes.

48’ – GOAL! Arsenal 3-0 Watford. Bellerin scores – Sanchez digs out a cross, Nyom heads it away, but back into the middle of the pitch. Bellerin is there to follow up with a volley that comes off Watson and diverts past Gomes.

50’ – IWOBI SHOT – Iwobi runs into the box to pick up a pass from Sanchez. He comes on to his left, beats Gomes with a rising shot, but it comes back off the bar.

90’ – GOAL! Arsenal 4-0 Watford. Walcott scores – Ozil launches a ball over the top for Campbell to chase. He stands up Nyom, beats him on the outside and plays it back for Walcott to tap in at the near post.