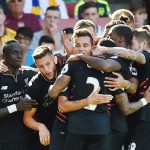 Coutinho is a class act – but Liverpool need to buy a left back. Coutinho has emerged as Liverpool’s key player and while his impact during their purple patch before and after half time was decisive at the Emirates, the pressure for him to deliver intensifies given the continued fragility at the back that has fans very worried. Alberto Moreno’s defensive deficiencies are nothing new, but Reds fans have been somewhat shocked that Klopp has failed to make buying a left back a priority this summer.

The Spanish defender had a nightmare in the Europa League final last season, prompting former centre back Jamie Carragher to criticise him on Twitter. Moreno’s inability to sense danger and make rash challenges have proved costly for Liverpool in recent times and he was again found wanting when he gave away the penalty and with his positioning for Walcott’s opener. James Milner has filled in at left back during pre-season and would probably have started in that role at the Emirates if he was fit, but signing a specialist in the coming weeks is surely an obvious way to improve the Reds team as opponents begin to target and expose the diminutive defender’s limitations. Ranieri Insists No Pressure On Leicester Ahead Of Arsenal Clash