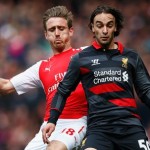 Olivier Giroud has now scored 10 goals in his last 10 appearances for Arsenal in all competitions.

Liverpool have conceded four goals in a Premier League match for the first time since their 4-0 loss at Arsenal’s North London neighbours Tottenham in September 2011.

Liverpool have equalled their biggest losing margin in a Premier League match under Brendan Rodgers – also lost 3-0 at Manchester United on December 14 & at West Brom in August 2012. Hull City Set Sights On Arsenal After Win Over Liverpool