Olivier Giroud and Santi Cazorla helped themselves to doubles as Arsenal completed a resounding 4-1 win over Newcastle United at the Emirates Stadium. 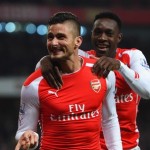 French striker Giroud ended a vibrant period of possession by heading Alexis Sanchez’s cross into the net for the opening goal on 15 minutes before flicking home his second on 58 minutes, four minutes after Cazorla had given the home side a 2-0 lead with a lovely finish from an acute angle.

Visiting substitute Ayoze Perez dived to head home for Newcastle from Jack Colback’s free-kick, but there was hardly any prospect of a recovery with Cazorla chipping a penalty straight down the middle on 88 minutes after Paul Dummett had felled Danny Welbeck in the Newcastle area.