A first-half hat-trick from Theo Walcott plus a goal from Jack Wilshere rounded off Arsenal’s Premier League season with a flourish against West Brom. 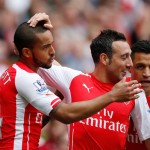 West Brom went in 4-0 down at the break and were fortunate that it was only by that margin. Arsenal were by far the better side, with Walcott and Wilshere both looking pacy,skilful and sharp after their injury troubles.

Walcott needed less than five minutes to open the scoring in spectacular fashion, firing into the top corner, and he followed that ten minutes later with some tenacity after Wilshere did the leg work.

Wilshere’s single goal was perhaps the pick, a terrific volley from the edge of the box, and Walcott secured his hat-trick with a tap-in just before the break.

West Brom reclaimed a little dignity as Gareth McAuley scored a second-half consolation from a corner, and Tony Pulis’s personnel changes managed to shore up the defence. Martin O’Neill : Nicklas Bendtner Is A Fine Player In The Making