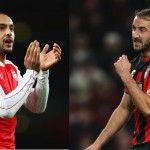 The Gunners are unbeaten in their last 21 Premier League meetings with newly-promoted opposition (W17 D4).

This will be only the second-ever competitive meeting between Arsenal and Bournemouth.

The only previous meeting between these two sides was a League Cup third round tie in 1987/88 that saw Arsenal prevail 3-0 thanks to goals from Alan Smith, Kevin Richardson and Michael Thomas.

Bournemouth will become Arsenal’s 80th different opponent in league football in this match.

Arsenal have not lost their final Premier League game in a calendar year since 2006; when they lost 0-1 away at Sheffield United.

Arsenal have scored in each of their last 29 Premier League games against newly-promoted opposition.

Arsenal’s last Premier League defeat against a newly-promoted side was in March 2012 in a 1-2 away loss to Queens Park Rangers.

The Cherries have won on five of their last six league trips to London (L1), including a win at reigning Premier League champions Chelsea earlier this month.