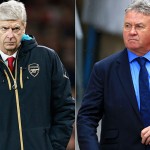 Arsene Wenger: “We needed to bounce back after the Southampton defeat (on Boxing Day) and now we are on a really good run. It’s a bit of a shame that we conceded a draw at the end of the Liverpool game, but it was a fantastic game for the spectators and it was one of the best games I’ve played in for Arsenal. The race is very tight because Leicester City and Manchester City will be fighting as well. We have a bit of an advantage over Manchester United and Tottenham at the moment but they could come back if you lose two games, you never know. It’s not original but it’s true that you always have to question yourself. I used to say that football is an everlasting new beginning and that’s like life too. Every week you have to push yourself out of your comfort zone to give your maximum so that you can win every possible game.”

Guus Hiddink asked if Arsenal are Chelsea’s rivals: “Not at this moment. Arsenal are doing very well, making a good bet for first position, and Chelsea are way down under. That is reality. I’m confident that the team on Sunday will give their upmost to get the results that have been achieved in the recent past, but of course it might be a little different. We don’t talk much about (relegation) but if you see the statistics and you’re closer to that line than the line where you are in the Champions League positions, that’s the fact. I’m not a person to deny the facts. It doesn’t mean we’re looking down – we have to look up.”