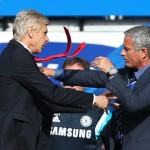 Arsene Wenger [Arsenal]: “It is not a confrontation (between managers), it is a confrontation of two teams. Football is down to the fact that the performance on the day will decide the game and the result, so let’s focus on that. We have not always lost, first of all, in 12 attempts. We have come close to beating them a few times and they have always had very strong teams. We are on a good run and we have an opportunity to beat them at home, and we want to take it.”

Jose Mourinho [Chelsea]: “For me, achievement is to win (on Sunday. It’s not the other 12 matches that we played before against Arsenal. It’s a big club with the same objectives that we have in the competitions we play. Because of that always comes a little bit of rivalry. He’s not my rival. I just feel he’s the manager of a big club in the same city where I work and I live.”