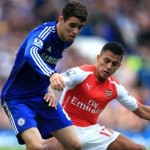 Arsenal defender Per Mertesacker is doubtful for Sunday’s match against Premier League leaders Chelsea because of an ankle injury. Gabriel Paulista is ready to come at centre-half. Goalkeeper David Ospina as well as full-backs Hector Bellerin and Nacho Monreal are expected to return, having sat out last weekend’s FA Cup semi-final against Reading at Wembley. Captain Mikel Arteta (ankle) and midfielder Alex Oxlade-Chamberlain (groin) are still not match fit.

Chelsea boss Jose Mourinho will make a late decision on whether to risk Diego Costa’s fragile hamstrings against Arsenal in a potentially decisive match in the Premier League title race.Costa has missed the last two matches, but could return ahead of schedule in place of Didier Drogba, who is fit after an ankle knock, as Chelsea seek a win which would see them move within three points of the trophy. Striker Loic Remy (calf) is definitely out, so Dominic Solanke could come on to the substitutes’ bench if Costa fails to make it.